Makefiles, but in English: Part 1 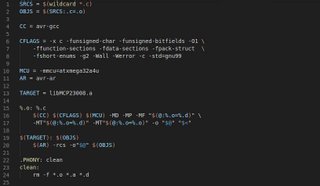 In this multi-part series, I will be covering Makefiles and the general behavior of Make itself. The only real prerequisite knowledge needed is a general understanding of Bash and the common Bash builtins. We are going to cover variables, functions, builtins (variables and functions), rules, and recipes. By the time you are done with this series, you should have a confident grasp of Makefiles and have the ability to quickly get started with any project. However, before I get started I'd like to make a few points. First, this series is not intended to serve as a reference for Make. Instead, it will give you a basic understanding of how to get started and, more importantly, it will give you a set of keywords to supplement your googlefu. Secondly, the snippets and examples that follow are tested using GNU Make v4.1. There exist several different versions and indeed completely different implementations of Make. There may be slight syntax differences in these different versions and implementations of Make, but the keywords in this series should point you in the right direction.

Makefiles, at a very basic level, are more or less script files. They allow the user to define functions, variables, they begin "execution" from the first line, and continue until termination. To define a variable in a Makefile, simply declare it with a name, followed by an assignment operator, followed by the value. For example: FOO = BAR will define a variable named FOO, with the value BAR. The actual value you set only becomes important in the context which it is used. Syntactically speaking, there is no requirement that Makefile variables be capitalized, but it immediately distinguishes them from functions and builtins; to each their own.

Although Make variables behave similar to Environmental Variables, these values are not globally set. For example, if you define some value FOO in your makefile, you will not see that value present in your C file (unless you explicitly instruct your compiler to). Similar to Bash, Make does not really have a type system, a variable defined to a string can later be assigned to an integer. Make itself is intelligent enough to be able to make the distinction between them at runtime. That being said, it is probably best to avoid storing different types in a variable.

There are a series of assignment operators in Make, and all of them behave slightly differently. Before I get into them, there is a concept which needs introducing, and that is expansion. If you are familiar with Bash and linux Environmental Variables, you should be familiar with the concept of expansion. Essentially, expansion is the evaluation of an assignment, whether it contains references to other variables or functions. Depending on the desired level of expansion, you can run into issues such as infinite recursion and infinite self-references. To address these issues, the authors of Make created different operators (actual operators in quotes to avoid confusion):

Now that we can define variables, how do we refer to them in the rest of the Makefile? Both variables and builtins are referred to using the $() operator, for example:

If you were to echo BAR in this Makefile, you would find that it contains foo bar. This shows not only variable reference, but Make's extremely simple concatenation. Again, if you are familiar with Bash this should all be familiar. Let's break down exactly how this works. First, we assign the value of FOO using one level of expansion. The value we set is fixed, there are no variable references or builtins to expand, it's simply set. BAR, on the other hand, must expand the variable reference to FOO, get it's value, and concatenate " bar" onto it. Note the space.

Calling functions in Makefiles is similar to the way that variables are referenced, wih the $() operator. This is true for both builtin functions, and user-defined functions, however user-defined functions are slightly different. In a Makefile, it is possible to define custom functions, but they are rarely used, so I will primarily focus on using builtin functions. For the sake of brevity, I will not be covering every single builtin available to you in Make, but I will cover how they are used, and what kind of functions are available to you.

To call a function in Make, you first need to know the name of the function, and the arguments which it accepts. The arguent system in Make is not so concrete as you might expect, instead it differs slightly from function to function. For instance, FOO := $(wildcard *.c) creates a variable called FOO and assigns the value to the output of the wildcard function. This function outputs the names of all files in the current directory which match the specified pattern. The wildcard is commonly used for automatic source file detection in simple projects. Along with the wildcard function, there are several other types of functions which are available in Make:

To call this function, you use the call builtin function, $(call myfunction)

This section is glossed over for a few reasons. Chances are if you're using a Makefile user-defined function you're probably Doing It Wrong™, it's already quite well documented in the linked book, and it's a fairly advanced feature of Make.